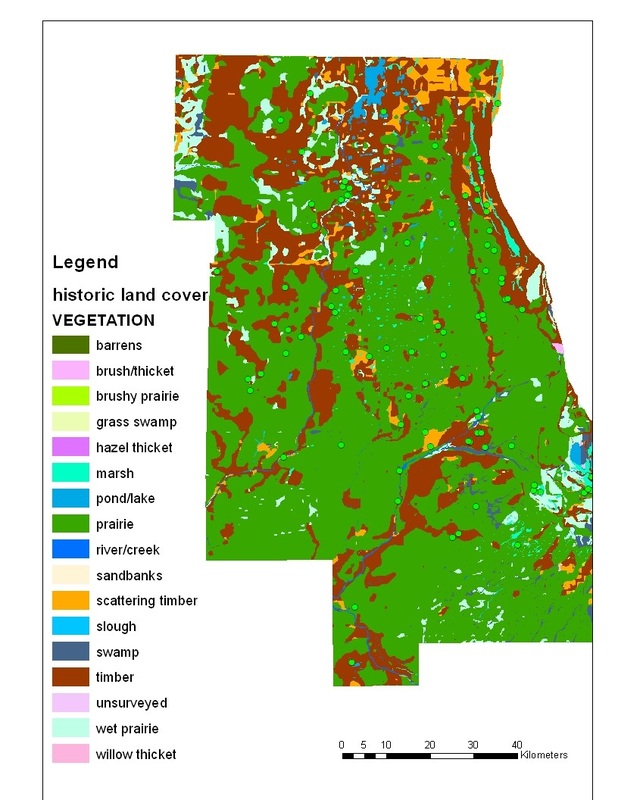 Assessment of prairie soil type
Are historical and current prairie remnants found on particular types of soils?  Are today’s prairies representative of the historic extent of prairie?  My recent work has focused on evaluating the soil series and soil types (such a sandy, loamy, silty) where remnant prairies are found and comparing that data with soils found in the areas recorded as being prairie in historic land surveys.

Conservation efforts are dramatically affected not only by management within a site or a preserve, but also by influences from the surrounding landscape. The changing landscape of the Chicago region has led to shifting sets of disturbances and stresses that must be addressed when managing local prairie ecosystems, which were once the dominant land cover of the area. To better understand the landscape context of remnant and restored prairies, we analyzed both historic and recent land cover surrounding Chicago-area prairies. Historical land cover information was based on Public Land Surveys conducted in seven Illinois counties from 1820 to 1841, and recent land cover was evaluated based on the USDA’s Cropland Data Layer (CDL). Land cover was considered at scales of 0.5 km and 5 km radii around site locations.

Of eight prairie preserves considered, sites averaged 75% cover of prairie and wet prairie within 0.5 km based on the historical land cover data. Land cover classified as timber averaged 14% around the sites although it was the dominant cover type around one of the prairies. Analysis of CDL data indicates some agricultural land uses around the prairies, which has declined in the period of 2000-2010 from 9% to 3% of the area within 0.5 km. Developed area, on the other hand, has increased from 23% to 30% in that same period.  The impact of development is quite apparent when considering the area within 5 km of the sites: in 2010, sites had an average of 64% developed land around them. More natural ecosystems (classified as forests, shrublands, wetlands, and grassland in the CDL) accounted for only 16% of the area within 5 km. This information highlights the fragmented and altered landscape context for conservation in the Chicago region. By understanding surrounding land uses, managers can better anticipate the types of issues their preserves are encountering, whether it be run-off from agricultural fields or issues with storm water management due to developed areas